Tips on changing the battery on your car key

When your key fob stops opening your car doors when you press the button on the key, it could mean the fob is broken or the battery has run flat. Follow our tips on how to find out which is the case and if the battery is flat on your car key, how to replace it.

When the key fob for your car stops opening the door remotely when it is pressed, it is never less than annoying. Let’s face it, these things never happen at convenient times. But in general, there are two causes of this problem – the fob is broken, or the battery in it has run out. 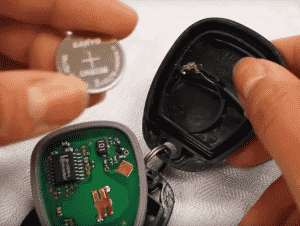 It is quite easy to work out whether the fob is broken or if the battery is dead; if the key will still manually open the car doors and start the engine, then it is likely that the battery in the fob is dead. If you have more than one fob for the car – which is recommended – try using that, and if it unlocks the door, again it is likely that battery failure is the problem with the other fob. If not, the fob has broken and will either need reprogramming or replacing.

If it is a dead battery, then that is good news as the fix is a lot quicker and cheaper than if the fob itself has broken.

Replacing a car key battery in most instances is an easy job that anyone can do in only a few minutes and doesn’t need any specialist skills or tools to do.

The first thing you need to do is to open the fob to remove the dead battery. Fobs are generally made of two halves stuck together. Sometimes you can prise them apart with a fingernail, but it is often easier – and potentially less painful – to do this with something like a flathead screwdriver.

Once you have gently opened the fob, you may have to lift out the circuit board to get to the battery. Key fob batteries are round and flat, but you need to check you have the right one to replace the existing one. The battery has a code printed on it, which starts with a two-letter prefix, such as CR. Only batteries with that code on will work in the fob: using the wrong sort could lead to damage to the fob – don’t assume that a more powerful battery will lead to a better-performing fob!

Replacing the battery itself is straightforward – just click it into place and then put the circuit board on top and click the outside halves of the fob back together.

Its always worth buying a pack of batteries so that you have a spare battery on hand whenever the need arises. Key fob batteries are available from any hardware store and most supermarkets and only cost a few pounds.

But be warned that if you have the battery out of the fob for too long, it can stop communicating with your car. If this happens, the fob will then need reprogramming, at which point you will need the services of an auto locksmith such as Keyworx to come and reprogramme it. So basically, don’t go off and make a cup of tea when you’re in the middle of replacing the battery, or it could end up costing you a lot more.

Reprogamming a car key fob doesn’t take long for an auto locksmith to do. They carry the specialist software with them – the same that the manufacturers use – that enables them to access the data required from your vehicle’s CPU and download it onto the fob again. It is also a relatively inexpensive job.

If the battery isn’t the problem and the fob has broken and needs to be replaced, then again this is something that your friendly neighbourhood auto locksmith can help with.

It is always worth going to an auto locksmith rather than to your local car dealership for a job such as replacing a key fob. Dealerships will want the keys for a period of time – perhaps a week – and they often cost a lot more to rectify the problem than an auto locksmith will. And that’s not taking into account the inconvenience of potentially not having your car for however long the dealer has it if you don’t have a spare.

However, an auto locksmith will come out to where you live – rather than having to go to your nearest dealership – at a time that is convenient for you and will fix the problem while you wait.

Auto locksmiths carry blank keys compatible with all makes and models with them on their vans, which they can download the correct data from your vehicle onto to recreate your original key – which means the car doesn’t require any reprogramming. Again, the job doesn’t take long to do and is relatively cheap.

As mentioned earlier, having a spare key is recommended because, in circumstances where your main fob isn’t working, it means you can still use your car and get on with your day. However, many people don’t have one as not every car comes with one or they have lost it.

If you would like a spare key, this is also something an auto locksmith can make for you, in the same way replacement keys are made.

If you need a key fob to be replaced or reprogrammed, or a spare one made, and you live anywhere in the East Midlands, give the Keyworx team a call. Our experienced team of auto locksmiths can give you a no obligation quote for any work that is needed which is competitive with any other auto locksmith in the East Midlands. If it your job is an emergency, one of our team can be with you in less than an hour.

For more information, call our friendly and knowledgeable team

Max Stewart
Truly grateful for all your hard work.

Mason Watts
Punctual and on time after quick response from my request.

Jordan Rose
Very professional, quick and friendly service. Honest pricing too. I would recommend to anyone.

Edward Evans
Turned up on time, friendly and professional. Great service more than happy with the jobs carried out asked them for their cards for future use. 10/10 for everything, would highly recommend!
Google rating score: 5 of 5, based on 19 reviews.