Tips on how to stop relay vehicle theft 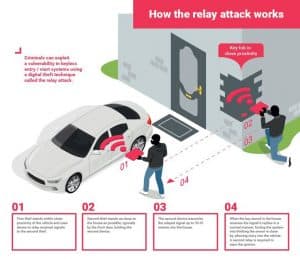 ars, but all that has done has made criminals all the more resourceful as they bid to stay one step ahead of the authorities.

Indeed, statistics from the Home Office figures found that vehicle theft has risen by 50% in the past fiveyears, with experts saying many cars are being stolen using keyless technology. The Government says that 56,000 vehicles are stolen in the UK each year, although analysts say that the true figure could be as high as 100,000.

One of the biggest growth areas of vehicle crime is theft of keyless cars. Stolen vehicle recovery expert Tracker says 96% of the cars it recovered between January and July this year were keyless entry, up from 92% in 2019. In addition, 82% of vans stolen are keyless.

Even though many cars were parked up at people’s homes between March and June, it didn’t appear to deter criminals, according to Tracker.

Many cars and vans now have keyless entry, where the driver doesn’t need to use a key or press a button on a fob to unlock or start the vehicle, they just need to have the fob nearby – such as in a pocket or handbag.

But this innovation isn’t proving as secure as the manufacturers – or drivers – would like and increasingly criminals are using sophisticated technology to hack into a vehicle’s on-board computer and drive it away within minutes – whether they have the fob or not.

What is a relay attack?

One of the most common forms of keyless entry vehicle theft is a relay attack. This is where, in general, two people work in partnership. One stands by the vehicle they want to steal, while the other stands near the house it belongs to with a device that can pick up the key fob’s signal. They don’t even have to be that close to the house – some devices can pick up the fob’s signal from more than 100 metres away.

The device relays the signal of the key fob to the vehicle, so the second person can get in and drive it away. It can take less than two minutes for criminals to get away with a vehicle using this method.

While the technology is relatively sophisticated, it isn’t expensive – devices can cost as little as £100 online.

This method is being used by opportunists and organised criminal gangs alike. Tracker found that the most popular cars for thieves to target are the Range Rover Sport, followed by the BMW X5, Range Rover Vogue and Land Rover Discovery.

The most commonly stolen van is the Ford Transit. Of course, with vans, it isn’t often just the vehicle is taken, but tools and materials stored inside.

The government has issued guidelines to car manufacturers to provide even more security as technology continues to advance and mitigate the risk of hackers accessing data.

Some car makers have already responded to the challenge. Last year Ford said that by 2021 all new models will come with a key fob that has a ‘sleep mode’ that triggers if the fob doesn’t detect any movement for more than 40 seconds. This, Ford says, will make it impervious to relay attacks. Existing Ford owners also have the chance to buy one of these key fobs for their car too, which would cost less than £100 and take less than an hour to programme.

Other manufacturers, including BMW and Porche, have similar ‘sleep mode’ systems and doubtless all the other marques will follow suit, if they haven’t already.

How to prevent a relay attack

There are a variety of ways that vehicle owners can stop their car or van being subject to a relay attack:

Following these tips – especially the one about protecting your key fob – can significantly reduce your chances of falling victim to a relay attack, although, as ever, nothing is 100% fool-proof.

If you live in the East Midlands and want more information on enhancing vehicle security, call Keyworx Auto Locksmiths on … or email us on … and one of our friendly and experienced team will be happy to help you.