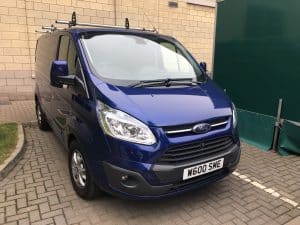 If your van is your business, then security should be one of your top priorities – if not the top priority – as thefts of vans costs millions per year. So how do you keep your van safe? Follow our top tips to find out how.

Van crime is a major concern in the UK: in the years from 2016-2019 more than 43,000 vans were stolen – that’s about 30 per day – with 117,000 more broken into, according to figures compiled by What Car? Vans from data from all 45 UK police forces under the Freedom of Information Act. This has cost businesses more than £61.9 million in lost tools and other items.

Theft of and from vans has continued in 2020. Radius Telematics revealed it had seen an increase in commercial vehicle thefts during lockdown because many vans had been left unattended for some time, with thieves seeing them as easy prey.

Given that many van owners also run small businesses, theft of the van or tools inside it can be devastating and have a long-term impact through lost work. Worryingly, what Car? Vans’ research also revealed that four in 10 of all new vans on sale do not come with an alarm as standard. So what can you do to make sure that your van doesn’t end up one of those statistics? Read our guide to find out:

While you might be forgiven for thinking that a van is secure as it comes with locks fitted, that is only the case to a point. Factory-fitted locks are mass produced to a set benchmark to comply with insurers, which means many thieves will know how to break them.

But there are plenty of additional higher security external locks that can be bought and fitted to the van’s front or back doors. External security locks have the added benefit that they provide a visual deterrent to would-be thieves.

There are a couple of common options for van owners; slamlocks and deadlocks. As the name suggests, slamlocks lock the moment you shut the door, which are a great deterrent and mean you don’t have to worry about remembering to lock it.

Alternatively, deadlocks keep your doors locked with a single bolt. These are strong and tricky for thieves to pick because there isn’t a spring involved.

Research into new vans on sale by What Car? Vans at the start of this year found that just 58% of models come with a factory fitted alarm as standard, while another 36.5% offered an alarm as an optional extra. The remaining 5.5% of vans have no alarm at all, although these were generally older models that will be replaced soon.

If your van doesn’t have an alarm fitted, there are plenty of aftermarket options available from dealerships, but it is worth considering installing a tracker alarm system.

Vehicle trackers have become a more affordable option in recent years as GPS technology has become established in the market. Some systems now can also alert the owner via a smartphone app if the vehicle is being tampered with or moved.

Should the worst happen and your van is stolen, a tracker can give you and the police more of a chance of recovering the vehicle.

Security when you are parked up

Enhancing van security is not just about fitting additional locks or alarms, you need to think about where you park it for the night and how secure that place is. Many thefts from vans take place at night when the van is parked outside the owner’s house or in a business’ yard.

For example, installing a security light outside your house or premises that comes on when it detects movement can be an effective deterrent as thieves prefer to work in the shadows. Similarly, parking in a well-lit, busy road can also put thieves off.

Likewise, CCTV can provide an effective visual deterrent – it is also important for gathering evidence if your van is stolen or broken into.

If possible, installing a security gate can also help to make your vehicle more secure as thieves won’t be able to drive off in the van.

But, if possible, you should always look to empty your van at the end of each working day. It might seem like an inconvenience at the end of a long day, but it is worth it to keep your tools or equipment safe. Thieves are also less likely to break into it if they can see there is nothing worth taking.

Buy the best you can

In the current climate, budgets for small businesses are often tight, but it is worth investing in the best security equipment you can afford for your van. Good security locks are a one-off investment because they shouldn’t get broken off. There is a degree of truth to the old saying ‘buy cheap, buy twice.’

While it might be a short-term cost, in the longer-term it could save you money. Not only could it save the cost of having to repair or replace a van or tools – and the associated hassle of dealing with the police and insurance company after a theft has occurred – it could also help to bring your insurance premiums down. Insurance companies look favourably on owners who have invested in addition security.

Get a professional in

If your lock has broken – or been broken by a thief – don’t be tempted to try and save money by replacing it yourself. Unless you are an expert in locks, you could end up causing more damage and making the job more complicated – and therefore expensive – when it goes wrong and you do end up calling a locksmith in.

If you do require an auto locksmith in the East Midlands, then give Auto Locksmiths a call. Our highly trained and experienced staff are experts in all forms of van locks and security and can come out to your home or premises any time of the day or night – and in less than an hour in an emergency. Our prices are competitive with any other auto locksmith in the East Midlands. Call us on 0333 7721846 or email info@keyworx.co.uk  for more information.