Car security through the ages 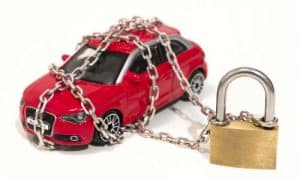 As long as there have been cars, there have been people trying to steal them, so security has always been a priority. As cars have developed, so have the security measures needed to stay one step ahead of the thieves.

Cars have always been prized assets. When they were first invented, they were luxury items and so attracted envy and made them attractive to thieves. Indeed, the first recorded car theft was in 1896 in France, when a mechanic stole a Peugeot belonging to Baron von Zuylen, who founded the Automobile Club of France.

After this, it became clear that anti-theft devices were going to be needed. One of the first tried was a removable steering wheel in 1900. The logic is clear – if there is no steering wheel, then a thief has no way of going in any direction other than straight. However, having to take a bulky steering wheel with you every time you parked up wasn’t exactly convenient.

It wasn’t until some time later that locks on doors started to be used. The reason though is simple – there was no point. Early vehicles didn’t have a roof, or even doors in some cases. It was the 1920s when locks were regularly added to cars. However, these locks were usually basic and could easily be picked.

Standard car security remained fairly basic for about the next 50 years. There were some security innovations in those years, such as locking devices that fitted between the steering wheel and clutch pedal, but they too could be bypassed fairly easily by determined car thieves.

Factory fitted car alarms were first introduced in the early 1970s, with US giant Chrysler being one of the first. Sensors were fitted to various parts of the car, which triggered an alarm if they were set off. The only way to disable it was with the car key.

The first mass-produced car alarm came along in the mid-1950s. The device, which was located in the glovebox had wires running to various entry points, all of which were connected to an external switch. This switch had to be disabled to ensure the alarm wasn’t triggered.

However, early alarms were easily disabled – and this is something that has plagued alarms ever since – but they can still deter some would-be thieves.

A major breakthrough in vehicle security came with central locking in the mid-1990s. This was done via a transponder placed in the key fob and linked to the car via a unique code. This meant all doors were automatically locked with one press of a key fob. It also meant that unlocking doors without the key, as well as ‘hotwiring’ a car – starting it without using a key – became almost impossible, for a while anyway.

Around this time, keys began to be cut by lasers, which made it more difficult for thieves to pick the lock of a car.Another major security advance came soon after with the advent of the engine immobiliser – they were credited with bringing about a 40% fall in car thefts after their introduction. The theory is simple: the car’s engine won’t start until the correct key or fob is present. Engine immobilisers have been mandatory on UK cars – and in many other countries – for some years now.

Another relatively recent innovation in security has been keyless entry systems, which have been installed on many cars in recent years. However, whenever security gets more sophisticated, the criminals quickly to do to find ways around it, and this was certainly the case here. For instance, relay theft – where criminals use a device to pick up a key’s signal and use it to open and start a car – has been an increasingly popular method of stealing cars in recent years.

Another recent innovation, and one that is gaining in popularity, is the tracking device. These devices, which use GPS technology to pinpoint the whereabouts of a vehicle in real time, may not always put off a car thief, but it can mean that the vehicle can be traced after it has been stolen, which could also lead to the apprehension of the thief as well.

The future of vehicle security

Vehicle security devices are getting ever more sophisticated, and this is set to continue. Dashboard cameras are becoming more common and can be used as an anti-theft device.

There is the possibility that things like fingerprint recognition technology will be used, which would only unlock when a pad is pressed by someone authorised to drive the vehicle. However, things like this are some way off.

Otherwise, vehicle manufacturers and security companies will continue to innovate in their security measures as they bid to stay one step ahead of the criminals – just like they always have.

With vehicle security as it is now, it is best to get a professional in if you have a problem with the locks or keys on your car, and auto locksmiths, such Keyworx as in the East Midlands, are the best people to call.

For instance, if you lock your keys inside your vehicle accidentally, then call a professional to deal with the situation. For instance, don’t be tempted to smash a window to retrieve your keys; not only is this dangerous – for you and any others who may come into contact with sharp shards of glass – it will also leave you with a large bill. Instead, it is cheaper and safer to call an auto locksmith who will be able to get into your vehicle within minutes, no matter what the make.

Auto locksmiths use the latest technology that means they can solve just about any problem related to the keys or locks on a vehicle – no matter what make, model or age of the vehicle. They can cut new keys, reprogramme the onboard computer within the car, replace broken transponders and more – and, in an emergency, they can be with you within an hour.

If you live in the East Midlands and need an auto locksmith, call on Keyworx or email usfor a fast and friendly response.