Reasons why you should have a spare car key 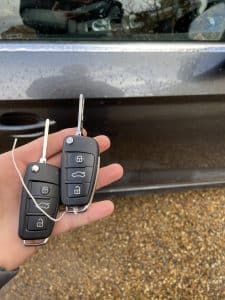 Millions of drivers in the UK are thought to not have a spare car key – but there are many reasons why you should have one, including saving time, money and stress.

Losing your car keys: we’ve all done it at some point – we’re in a rush and the keys aren’t where we thought they were. There then ensues two minutes of panic turning the house upside-down to find them down the back ofthe sofa.

However, for some people, it isn’t just a case of absent-mindedness and the keys are lost for good. A 2018 survey by motoring organisation the RAC found that about 2 million drivers lose their keys each year.

But when you consider that about 40% of UK drivers don’t have a spare key for their vehicle, it can create a major problem if the primary key is lost. Without a key, you’re not going anywhere until you have a replacement – and the cost, in terms of money and time, can be significant, not to mention the stress the whole situation presents.

This is just one reason why it makes sense to have a spare key. But there are plenty of other reasons, including:

If you do lose your car key, then having a spare key means that you can still drive the car. It can also save time if you can’t find your other car key but know that it is, for example, in the house somewhere – you can still drive to where you need to go and not be late, but you can then come back and look for the missing key later.

If more than one person regularly drives a car, then just using one key can be problematic. For example, it can increase the chances of the key getting lost, or one driver can forget where they put the key. Also, if one driver has left the house with the key but not taken the car, the other driver has to wait until they return before they can go out.

Retrieving car keys from inside a locked vehicle is one of the most common call outs for auto locksmiths. It is easily done – all it takes is a few seconds of carelessness. However, if you have a spare key it means that retrieving them takes seconds, rather than having to call an auto locksmith to get them for you, which, even in an emergency, can take up to an hour.

Of course, if you don’t have a spare key and do require the services of an auto locksmith to retrieve them, then give Keyworx a call on … – our technicians can often have a vehicle open within minutes.

Security if a key breaks

Modern car keys are hardwearing pieces of kit, but they do occasionally break – the key may snap, or the transponder chip could stop working. In such cases, having a spare key means that you can continue driving your vehicle while you get a replacement sorted out.

Security if a key is stolen

Having your car key stolen is a nightmare scenario, but if you have a spare key, it can help you to keep your vehicle safe. If you can get your spare key and get to your vehicle before the thief, you can drive it to a safe location before calling an auto locksmith to come and make the car secure again by cutting a new key and deleting the old key’s data from the car’s ECU.

If you need a replacement key, then it is much more difficult and time-consuming to do if the auto locksmith has to access the data from the car’s ECU, rather than cloning the data from a spare key, which, in some cases, can take seconds to do.

Some of the more modern car keys can store data on driver’s preferred settings – such as seat and mirror positions – which are automatically detected when the car is opened. Having more than one key means that drivers can save their own settings, which saves time having to adjust it every time you get in the vehicle.

Of course, having a spare key is only useful if you know where it is. While the chances are it won’t get used, a spare key should be stored in a safe place so that you know where it is at all times. Just throwing it in a drawer could see that get lost as well – and that could prove to be an expensive mistake if you have to get two new keys cut and programmed.

Why use an auto locksmith to get a spare key?

Finally, auto locksmiths are often cheaper than main dealers, who can charge hundreds of pounds for a new key, if it is a particularly sophisticated one. Auto locksmiths often use the same equipment as main dealers, so the standard of key is the same.

If you don’t have a spare key, and would like one cut, then give Keyworx Auto Locksmiths a call. Our team of experienced auto locksmiths can come out to you, wherever you are in the East Midlands and cut and program a spare key for your while you wait. Our team can cut keys for any type of car or van on the UK roads today.

Keyworx’s prices are competitive with any other auto locksmith in the East Midlands, so for more information and a no-obligation quote, call our friendly team today on … or email …